Coca-Cola Case: What Every Tax Professional Should Know

This is a summary of the UNITED STATES TAX COURT decision on THE COCA-COLA COMPANY & SUBSIDIARIES v. COMMISSIONER OF INTERNAL REVENUE dated November 18, 2020. The case is very interesting for every tax and transfer pricing professional, as it provides unique insights into Coca-Cola business structure, as well as transfer pricing arrangements and policies of the group. It also shows how tax court deals with transfer pricing methods and transfer pricing adjustments. From a technical perspective, the case gives valuable examples of functional analysis, application of comparable profits method (TNMM in OECD terms), the residual profit allocation, use of return on assets as a profit-level indicator, and many other TP nuances. The case relates to 2007-2009, so bear in mind that the structures described may have changed substantially since then. For more details about the arm's length principle and intangibles transactions, visit our transfer pricing course page.
Spoiler – IRS won and reallocated approx. 9 billion USD of taxable income to the US. 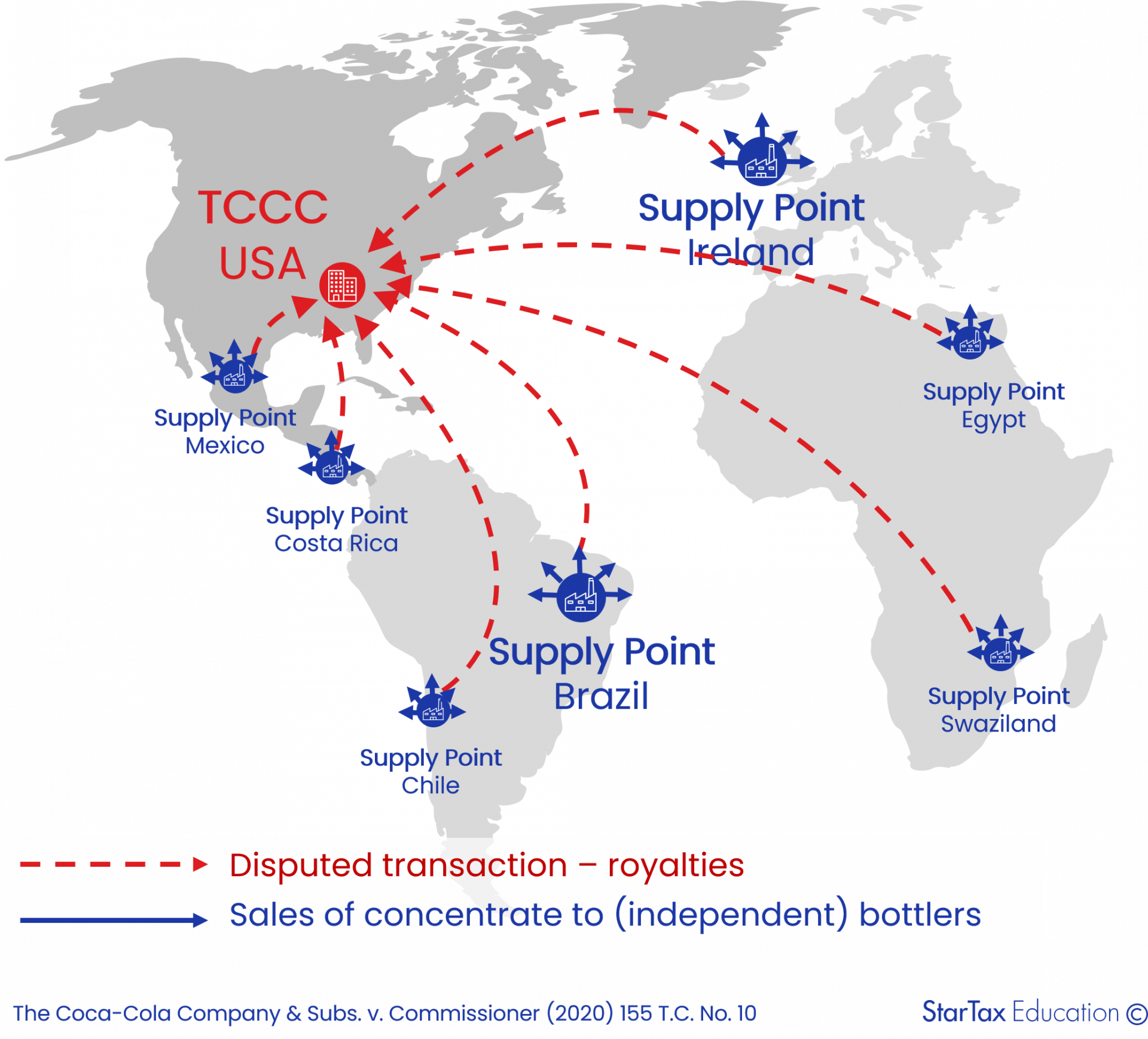 TCCC and Supply Points entered into Supply Point Agreements, which granted the Supply Points the rights to produce and sell concentrate in accordance with TCCC’s specifications. The profit from concentrate sold by Supply Points to Bottlers was split between Supply Points and TCCC based on “10-50-50 method.” This was a formulary apportionment method to TCCC, and the IRS had agreed in 1996 when resolving tax liabilities of Coca-Cola for 1987-1995. This method permitted Supply Points to retain profit equal to 10% of their gross sales, with the remaining profit being split 50%-50% with TCCC. Supply Points paid 50% profit split to TCCC in the form of royalty (with an option to remit dividends instead). 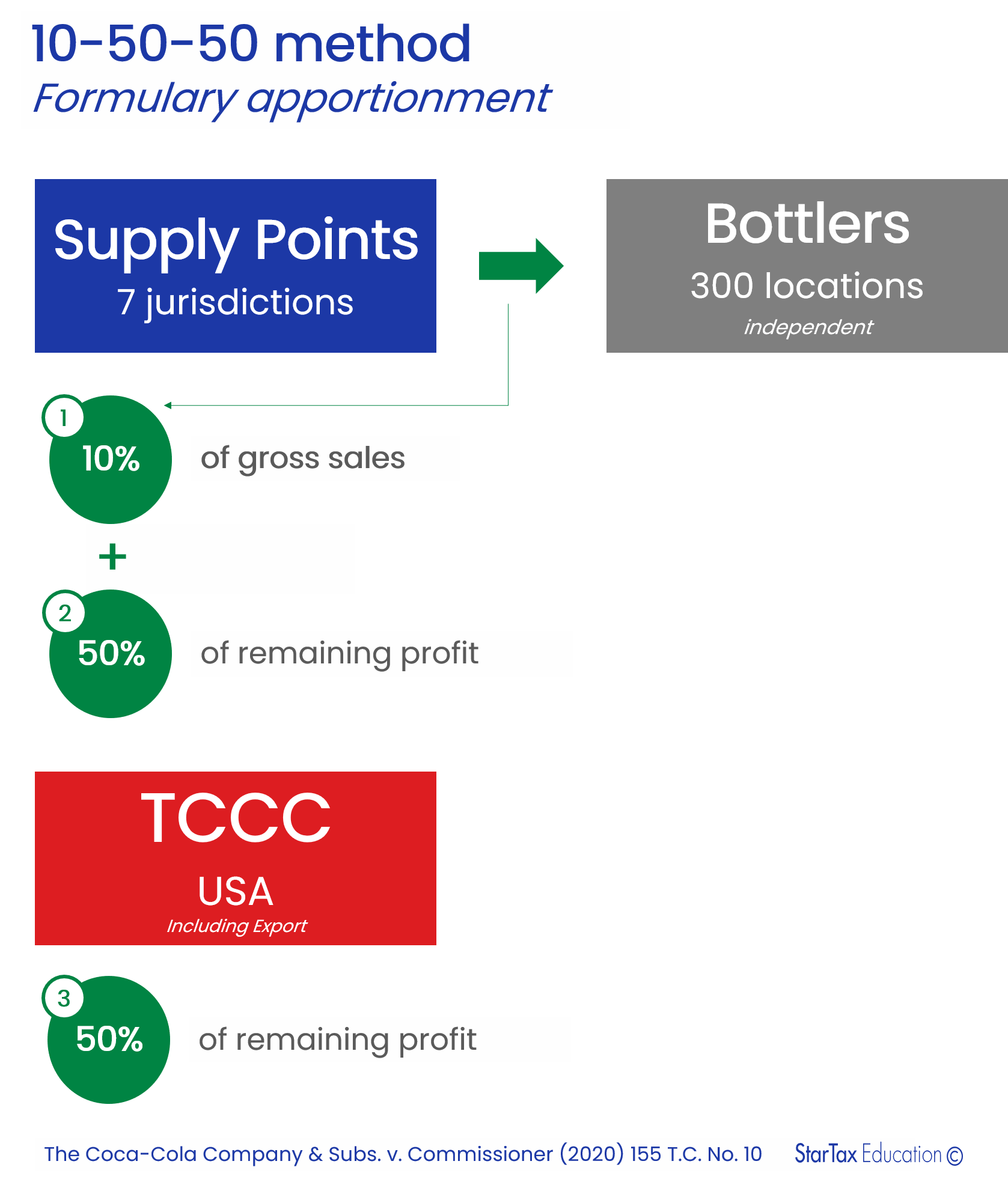 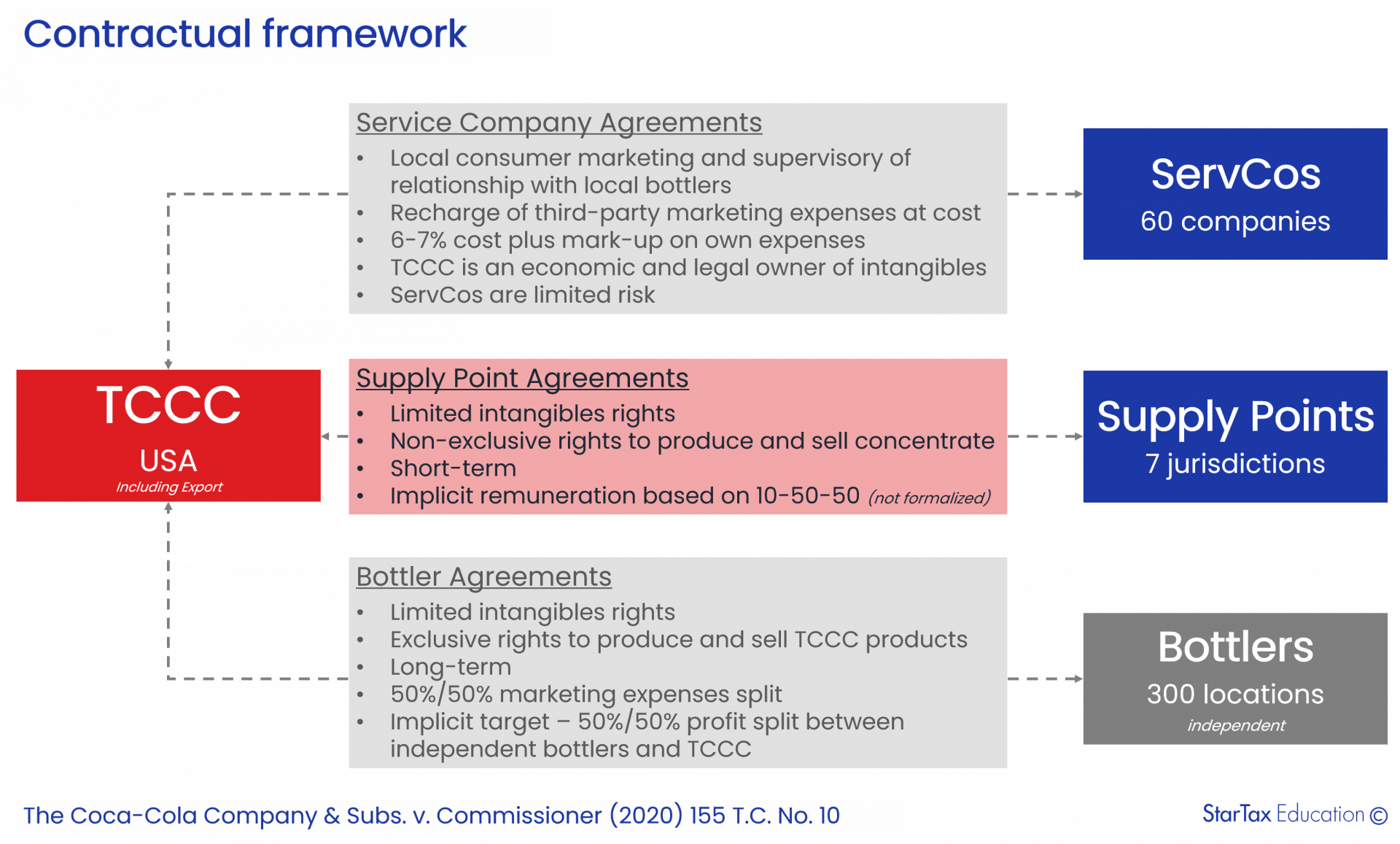 TCCC also had transactions with ServCos, where they recharged third-party marketing costs to TCCC with no mark-up. In addition, ServCos charged TCCC for marketing and supervisory support services provided by ServCos personnel with 6-7% mark-up (profit margins) on relevant costs. TCCC then recharged relevant portions of ServCos costs to benefiting Supply Points. Neither Coca-Cola nor IRS disputed arm’s length nature of these transactions. 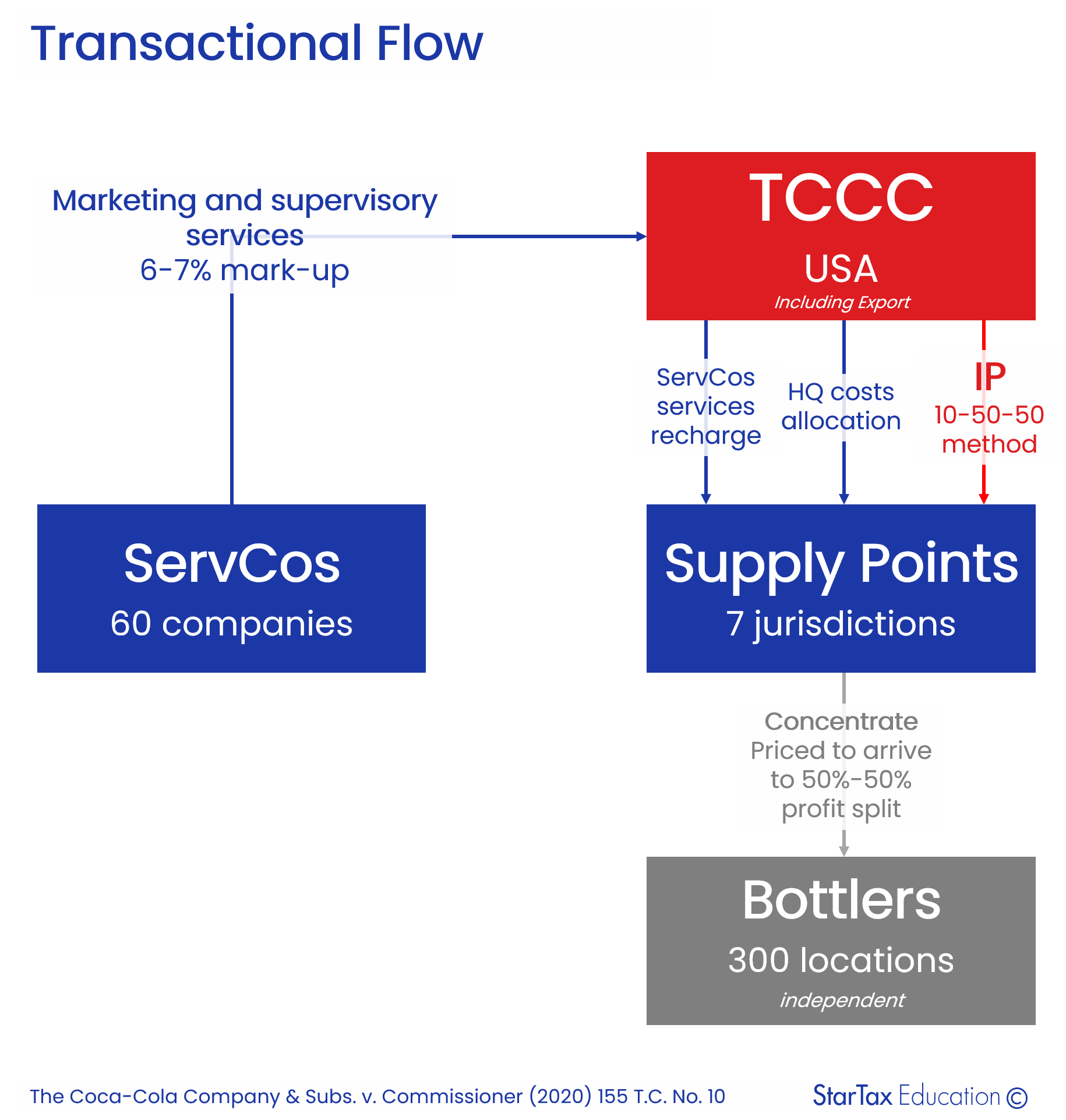 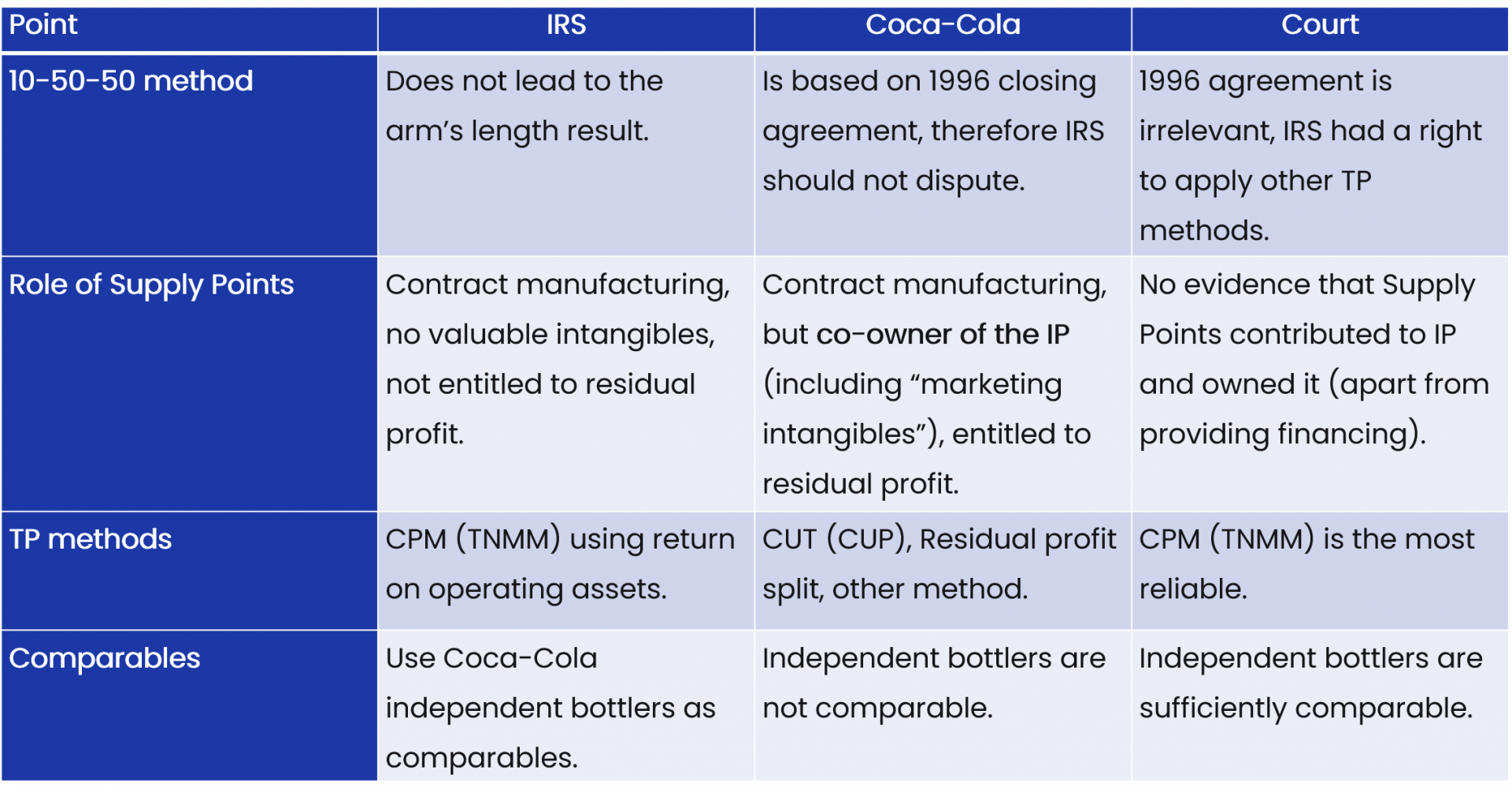 Court supported the IRS in all material aspects of the case. Essential points highlighted by the decision:

There were several other interesting discussion points, and therefore we recommend reading the original case decision in full.
What did you like in this transfer pricing litigation case? Share it with us using contact details below.